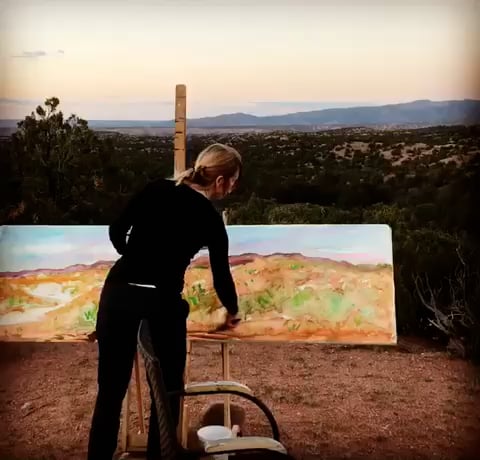 I took a detour when I returned to New Mexico the second time.  The desert changes a person. Everything I did before and everything I do now influences my art.  My subject matter, composition, color and line all speaks to the nature of my art and life. I studied art in California , New York and New  Mexico . I received my MFA from Columbia University in New York City where I studied  art and business .

I am currently an artist in residence at La Fonda Hotel.  Because there are so many ways to view a subject, place, or thing. I find myself  drawn to series -- a number of things, events, people or places of a similar kind or related nature coming one after another.  That said, nature has also been an inspiration with all its beauty, color and sacred geometry.

You can make an appointment to visit my studio by calling  or texting 505 231 8961 or email me at sandyvaillancourt@gmail.com.

There are many reasons people collect art. For some it is to support artists, for others it may be to preserve history, or maybe to elevate humanity by encouraging the creation of beauty. In some cases it is purely an investment and for the  adventure of finding new art

New cards and prints at Kakawa

Kakawa chocolate House has a new location in Santa Fe on San Mateo Road in Midtown.

“After 7 years on Canyon Road I have moved my studio to a new space in the Byzantium loft complex  on Pacheco Street part of the rail yard district  in Santa Fe.

The new address is 1348 Pacheco Street , #203 Santa Fe . The studio will have original contemporary  art  including watercolor, oil and mixed media paintings  as well fine art prints and greeting cards.

Have a book you need illustrated? Need cover art for your book or CD? Want  to use an image on my website for charitable purposes? You love what you see but need a custom painting made for a special occassion, a special place or  a special individual...then email me for details on pricing and schedules at sandyvaillancourt@gmail.com.

La Fonda on the Plaza holds a coveted place in Santa Fe history, a component in a rich tapestry of hospitality that predates American independence. City records indicate that La Fonda sits on the site of the town's first inn, established when the city was founded by Spaniards in 1607, making our property the oldest hotel corner in America.

Vibrant and eclectic, and a proud member of Historic Hotels of America®, La Fonda's history can be traced back 400 years. In 1821, Captain William Becknell and his party found their way to the La Fonda during the maiden commercial route across the plains from Missouri, establishing the Santa Fe Trail as well as La Fonda's reputation for hospitality. Throughout the 19th century, La Fonda quickly became the preferred lodging option among trappers, soldiers, gold seekers, gamblers and politicians. The adobe structure changed hands several times as the years progressed, enduring milestones such as the Civil War, railroad expansion and New Mexico statehood, while maintaining its status as a Santa Fe landmark.

The structure that guests enjoy today was built in 1922 and features the influence of architects Mary Elizabeth Jane Colter and John Gaw Meem. Authentic elements including hand carved beams, stained glass skylights and a 25 foot cathedral ceiling create a romantic aura unique to La Fonda's Santa Fe history. Elements of the original design are still evident throughout the hotel, with La Plazuela situated on the hotel's original 1920's outdoor patio, as well as breathtaking skylights, terracotta tile and hammered tin chandeliers in our event venues. In 1925, the building changed hands again when it was acquired by the Atchison, Topeka & Santa Fe Railway. The company leased the property to Fred Harvey, a gentleman renowned for his keen sense of hospitality. Harvey introduced his own personal touch and made the inn a Harvey House, a hotel chain noted for its high standards, fine dining and the signature "Harvey Girls," a staff of exceptionally well-trained waitresses. Recently, Daggett Harvey, a Fred Harvey descendant, and Stephen Fried, author of Appetite for America: Fred Harvey and the Business of Civilizing the Wild West—One Meal at a Time spoke at La Fonda about how the company supported women and people of color in the workplace and how economic and social forces led to its sale in 1968 and the demolition of so many Harvey House gems.

Check out this great video

Be the first to hear about upcoming exhibitions, articles about our artists, and special events.

I hope to see you soon.